A First Dive Into Project 72 Porsche 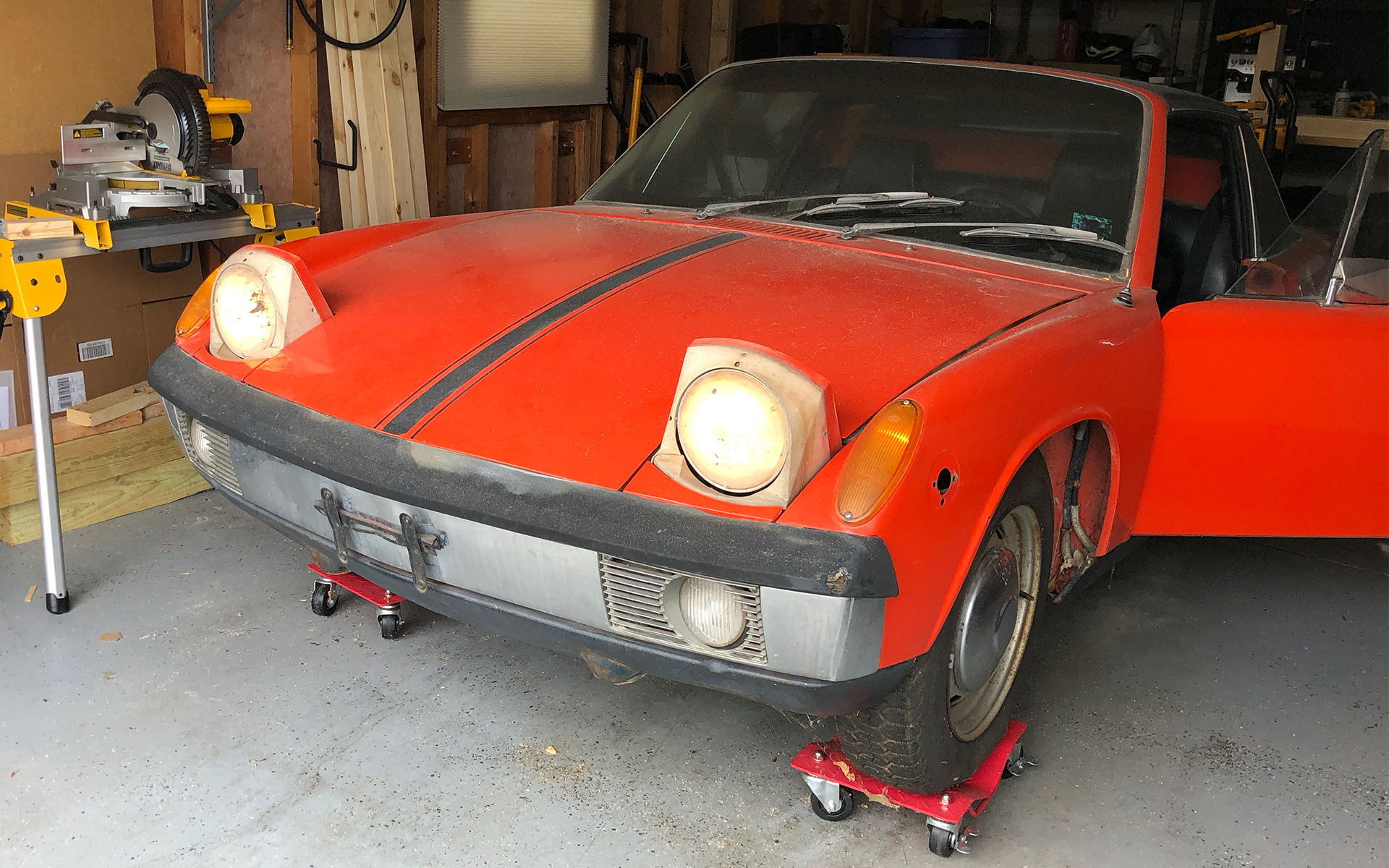 Now that I'm working from home I actually have time for this hobby.

A lot of people in my professional field get to work from home from the get-go. Unfortunately, the company I work for has been a little slow to adopt WFH policies, but this pandemic has forced the issue. So, now that I'm not commuting the 70 mile round trip, I find myself with 2+ extra hours a day (that's at least 10 extra hours each week if you're good at math) in which I can reasonably get home chores done, and still have time left over for a hobby (or two).

Finally digging in to the Porsche, organizing my thoughts, the first objective is to get the car started and running. This meant first getting the engine to turn over. So, I started with an oil change by purchasing an oil change kit (part # PEL-OILKIT-914-4B) from Pelican Parts. This kit includes the filter, the oil, one washer and two gaskets for the oil sump (strainer). Beware, though, the kit does not include a second washer for the oil drain plug. I was able to re-use mine as it was in pretty decent shape, but really this should be replaced every oil change.

The oil change process is fairly straight forward once you see how to do it. I found a video on YouTube: Porsche 914 for Newbies - Ep 07 How to Change the Oil by Ian Karr. Ian has a whole series on the Porsche 914 for Newbies that is really informative, and got me through the oil change. Everything I read on the oil change said to be really mindful of the torque on the drain plug, and the oil sump nut. It was a little nerve-racking tightening those two bolts back up as I didn't want to strip the engine block.

After letting the oil drain for an hour or so, I put everything back together, and started putting oil back in the engine. Which leads me to an important lesson I learned, one that may sound obvious to most people: never pour oil directly from the five quart container. It will spill and splash everywhere! With the oil topped off, I decided to charge the battery (which has been sitting for several years), and see if I can get the engine to turn over. After a few days charging, I turned the key, and to my surprise the engine turned over. And it sounded nice! I was so excited!

I was so excited, that I decided to really push my luck, and fill the gas tank with a couple gallons of gas. I had inspected the fuel tank over the winter and determined the inside of the tank was clean enough that it didn't need replacing. So I went for it!

And here is my second lesson learned from this episode: start by pouring in a little bit of gas before you put in, say, two gallons. That way you can see if you have leaks in the fuel lines. Boy, did I have leaks! I was able to catch it in time before the entire garage floor was soaked in gas, but it took a couple of days of airing out the garage before the smell was gone.

Another trip back to Ian Karr, and I learned that the 914 was notorious for having rotten fuel lines. The rubber lines Porsche used tend to quickly dry up, and spring leaks. A lot of folks replace them with stainless steel lines, but I didn't want put that much time and expense into the car yet just to get it running. Maybe later though. I ended up ordering some bulk fuel line (part # 999-181-152-50-OEM) and a Y-fitting (part # 901-356-461-00-OEM) again from Pelican Parts. There were a few short runs of fuel line that needed replacing, and while they were a little difficult to reach, I was able to get it done.

So now the car sits, with about a gallon of gas in the tank, and the battery charger trickle charging enough to attempt a real startup. Here we go!

Here is a cool site, and a couple of cool videos I came across during my research: 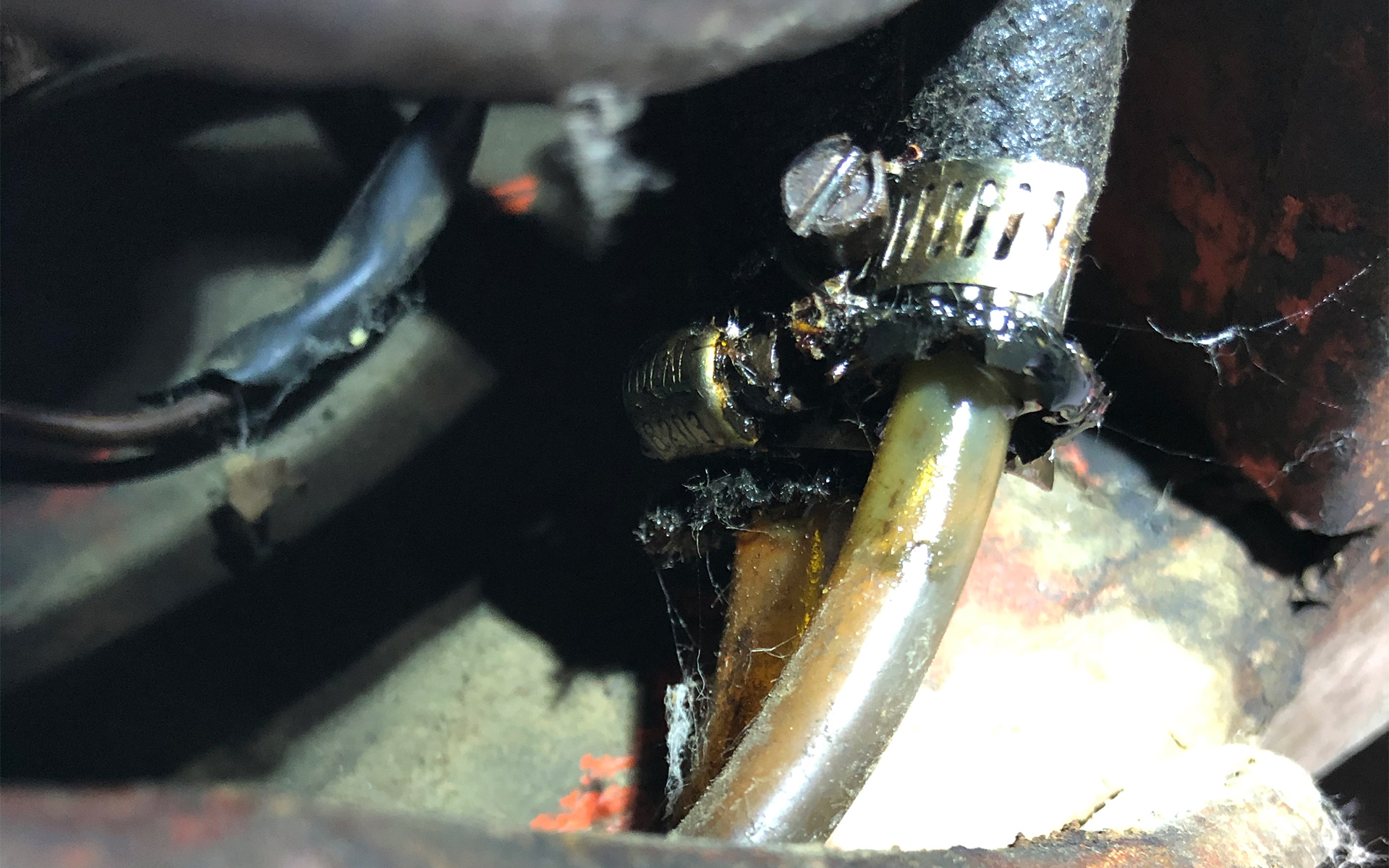 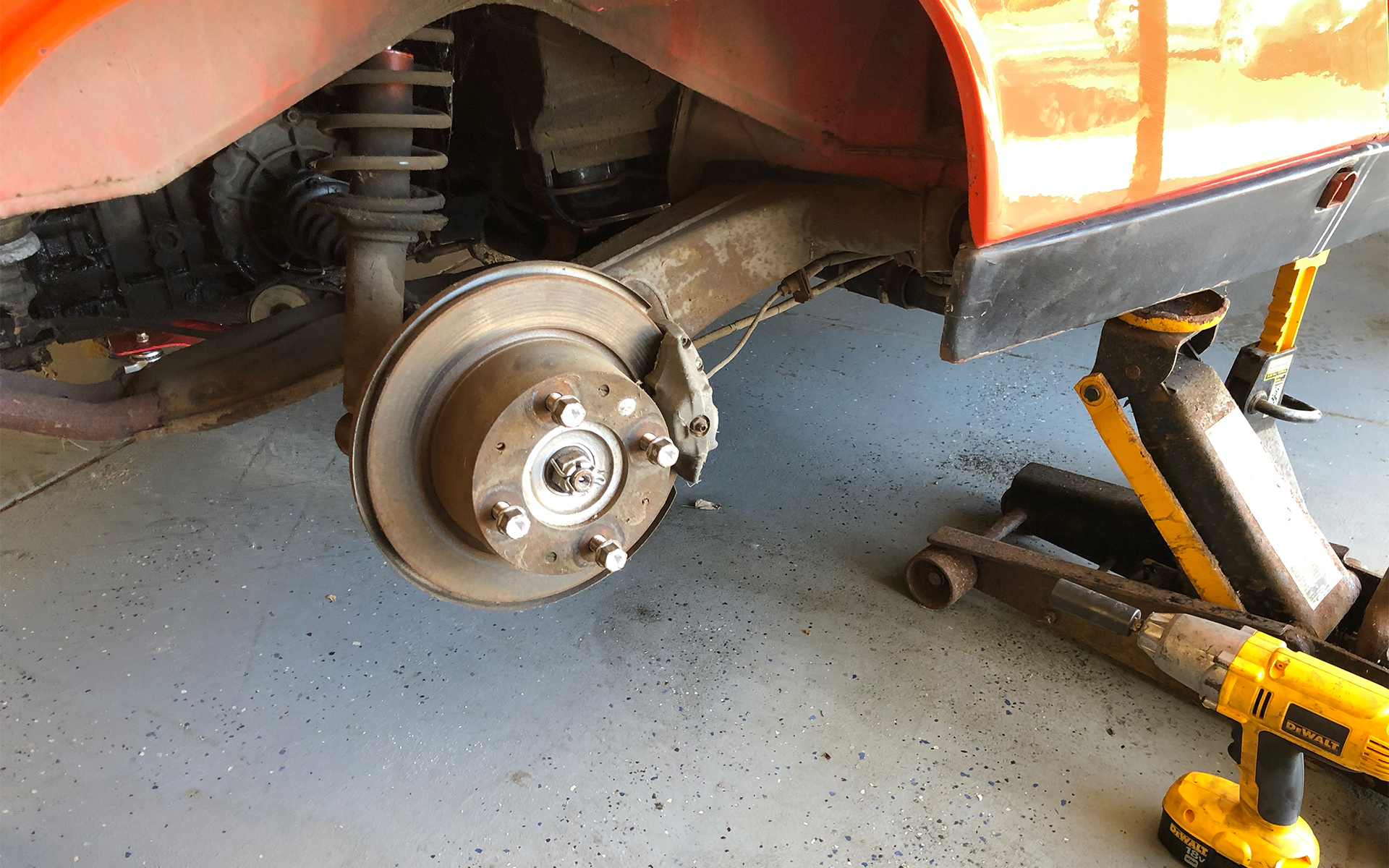 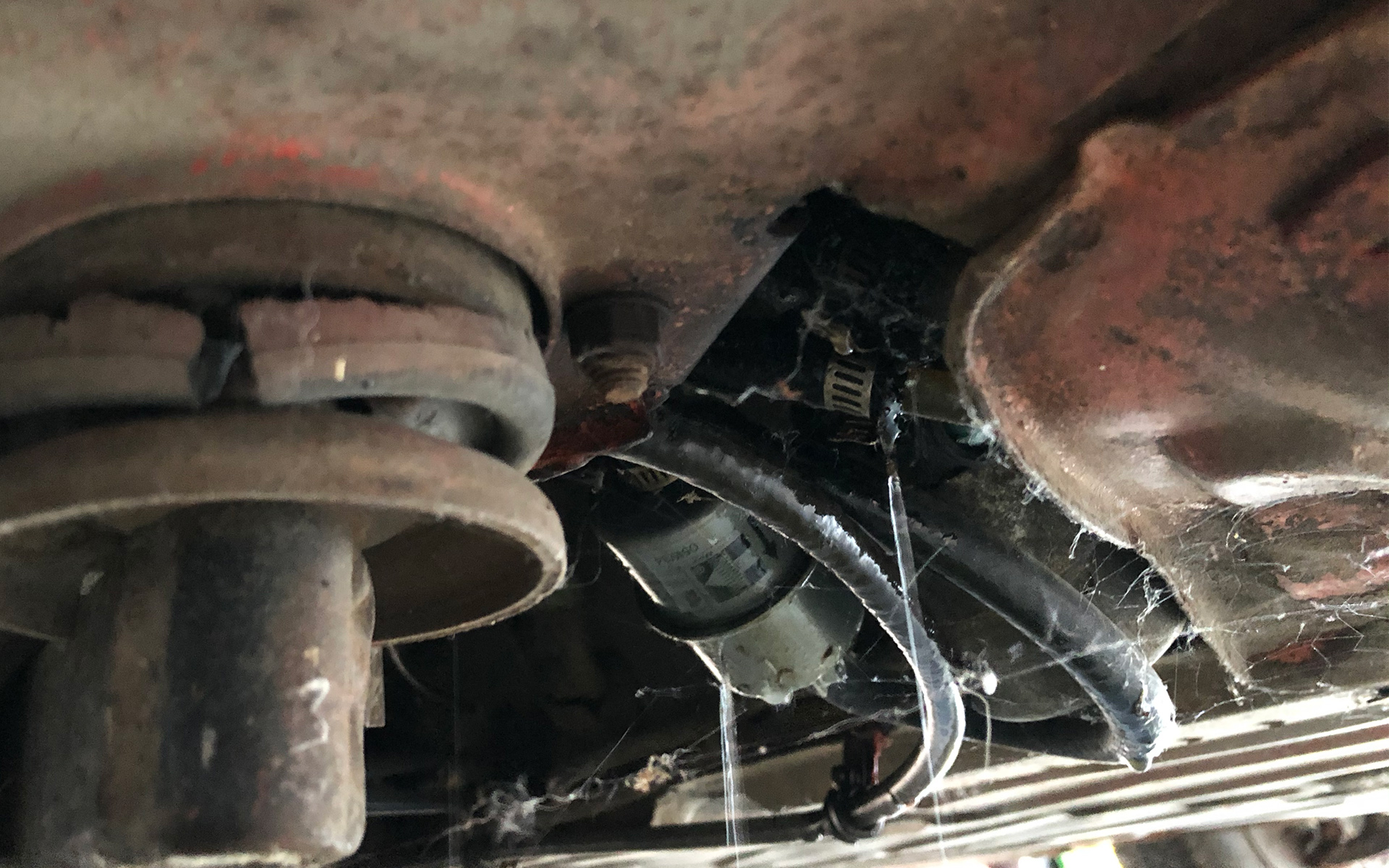 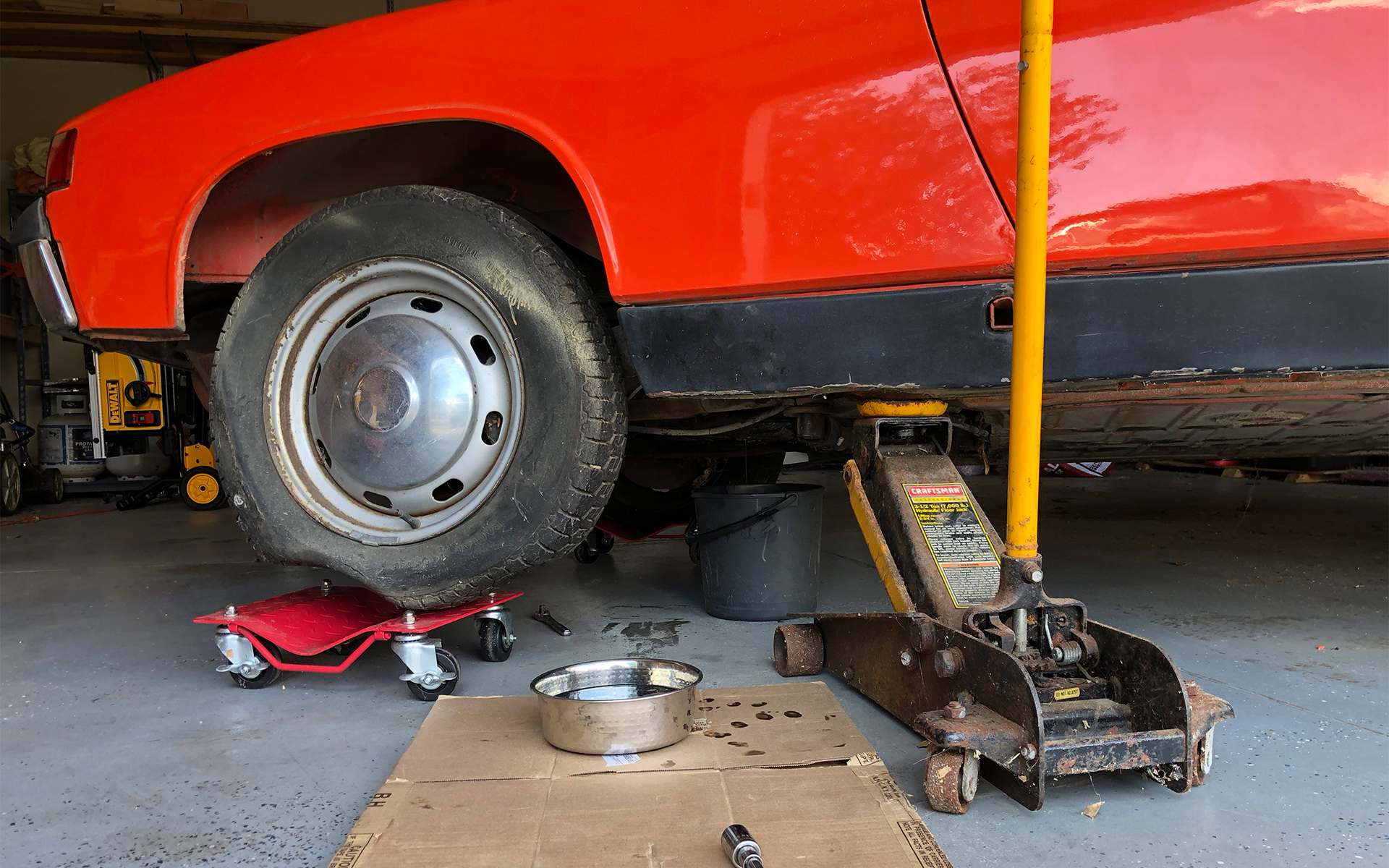